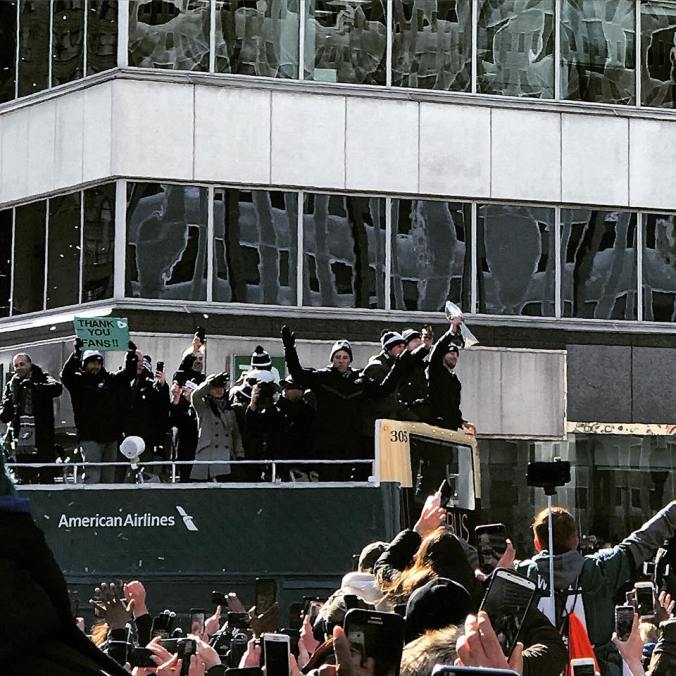 I took last week off from writing in the entirety, in part because I was busy, and in part because I didn’t have any fully formed thoughts to say. In the last piece I wrote, I predicted the Eagles would win the Super Bowl- just hours before they did. Even though that was my prediction, I still can’t believe it happened.

When the hail mary from Tom Brady landed incomplete in the end zone, I didn’t really have much immediate reaction. I was too shocked. I will be the first to admit it, I never thought the Eagles would ever win a championship in my lifetime. The last time they had won, 1960, my father was three. The Eagles had been a bad franchise in my lifetime to be honest, a franchise that hadn’t won a title. It wasn’t just that though- they always seemed to get close. This was their sixth NFC Championship or further in my lifetime. This was only the second time they were playing in the Super Bowl though, and they lost that time. You see, that’s the frustrating thing about the Eagles for a fan, they can’t just suck every year. We not only had to fail, but we had to do it in heartbreaking fashion. Basically, after the loss to Arizona to end the 2008 season, and then seeing my favorite Eagle (Brian Dawkins) simply cut loose, I had a negative view of the team. I didn’t ditch them and go cheer for another team, I just became extremely cynical. We aren’t supposed to win- until now. So when the Eagles did win, the shock over me didn’t make it all that real at first. There’s no way it happened.

The Eagles did win though. It happened. Nick Foles, a quarterback who I once said would never be good enough to win a Super Bowl (back in the Chip Kelly days), not only won the Super Bowl, but he won the MVP. They not only won the Super Bowl, but they beat Tom Brady, in all of his 500+ yard best form, to win that Super Bowl. By Monday, it started to set in. By Tuesday I was finalizing plans to be at the parade- on Thursday. The impossible had set in.

So, about that parade- I’m the most die-hard of Phillies fans, but was unable to go to the 2008 parade because of work. I was going to this parade. I took a pre-dawn bus down to Center City with a bunch of childhood friends, all of us witnesses to all of those heartbreaking losses, and drank and made merry on the corner of 15th and JFK and watched the parade with hundreds of thousands of our anonymous, closest friends. It was an amazing, amazing experience. Almost everyone was happy and decent towards each other (there are always a few jerks). It was a sea of green. When the team went by, it was euphoric. There was Carson Wentz, holding up the Lombardi Trophy, the moment every Eagles fan about my age never thought would happen. It was amazing. I have no other words for it. I couldn’t even come up with those words for days.

All week, friends of mine and I have debated if this is better than 2008, and all I can come up with is that this is different. The Phillies are my #1, period, and their win in 2008 seems unmatchable. On the other hand, it was also more of a relief than anything. No Philadelphia team at all had won a title since I was one month old in 1983 (The Sixers). Had the Phillies failed to win that World Series, I think I might have given up all hope. This Eagles win was different, in that I really felt like it was going to happen all along, and I have no idea why. Before the season, I thought this Eagles team would win seven to nine games and be entertaining, on paper, and yet when they started winning games early on, I didn’t feel all that shocked. Perhaps it was because I liked these players, perhaps it was because I always had more confidence in Doug Pederson than I ever had in Chip Kelly, or perhaps it was just because I was so certain I’d never see a title that I never actually got nervous about them blowing it. I don’t know. I obviously was really happy about both the Eagles championship and that last Phillies championship. I really can’t draw a distinction between the two though, because they were so different for me. Nothing can ever top that moment in time that was the Fall of 2008 for me, because the entirety of my life was in a special faze, but this is just such a happy moment as a fan that I can’t really put it down in comparison to anything else.

Perhaps the happiest thing about the Eagles championship is the happiness it seems to have brought the entire region. I saw grown people at that parade, smiling from ear to ear, who were just so happy that their Eagles had finally given them that championship. No more abuse from New York, or Washington, or Boston, or Baltimore, or Pittsburgh, or especially Dallas, about how Philadelphia never had a Super Bowl ring. No more expectations of losing. No more wondering if this team was good enough. The Eagles are champs. Yes, the Eagles are champs. I could say it all day.