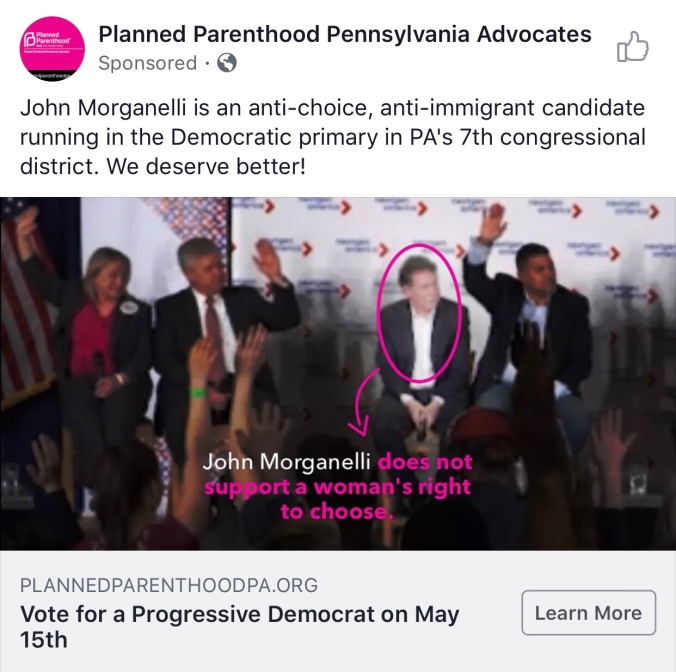 I’ve finally had enough time and distance to decipher what happened in the 7th Congressional District Primary a couple weeks back, and I think it’s mostly self-evident. I could simply write here that outside groups spent somewhere north of $600,000 tearing John Morganelli down for his positions on immigration and a woman’s right to choose, but more so for tweeting nice things at Donald Trump, and I’d be pretty much right. Sure, we should acknowledge the influence of “the year of the woman,” but two-thirds of the electorate voted for a male. We could talk about the “leftward movement” of the Democratic Party, but the Bernie-endorsed candidate came in third, with about a fourth of the vote. We could even make it a choice issue, but close to 35% of the voters picked a pro-life candidate, which is high in a Democratic Primary. Basically the race was about the front-runner, and he got torn apart by a wave of outside money for straying from the Democratic Party orthodoxy. Over-reading into this race further than that is basically going into some questionable conclusions.

There is something a bit more happening though, something beyond the candidates. Who the voters are, and where they are, changed. A cursory look at the map can give you a strong signal: 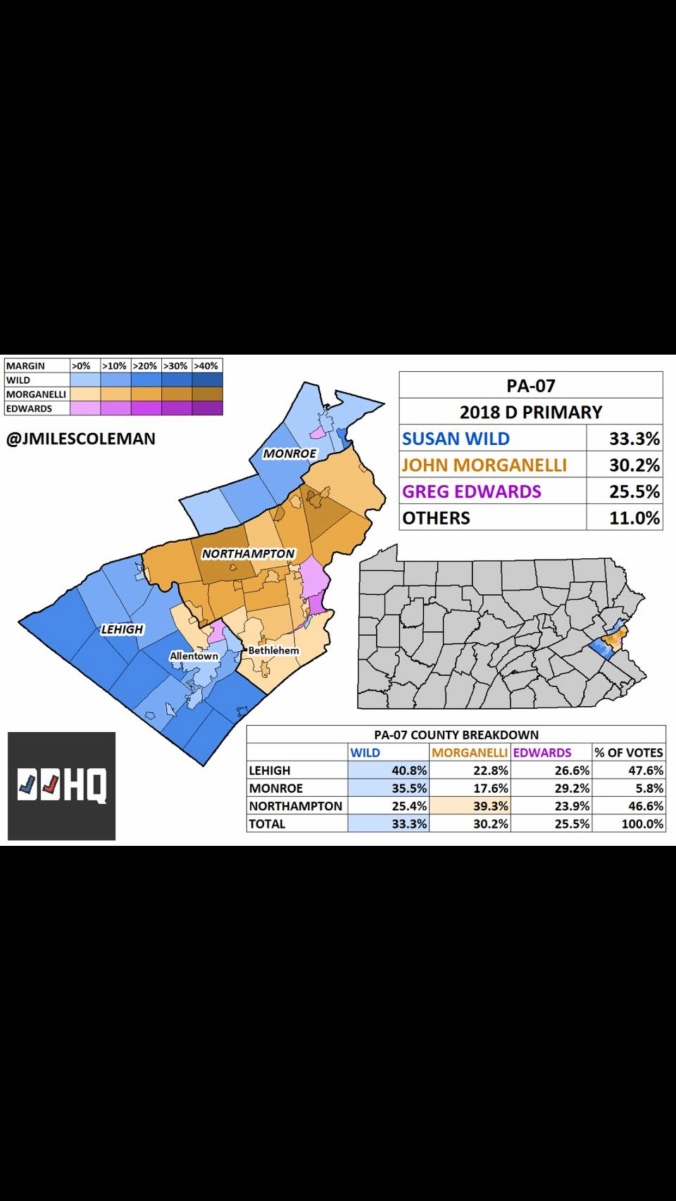 John Morganelli ran up impressive margins in the northern tier of Northampton County, in former Democratic strongholds like the Nazareth and Northampton areas, and in a generation ago’s Democratic strongholds in the Slate Belt. Susan Wild ran impressive margins in the southern and western areas of Lehigh County, former Republican strongholds full of white-collar workers. One area is a more blue-collar, traditional Democratic stronghold that is in decline as a share of the electorate. The other area is a more white-collar, traditional Republican area that is swinging against Donald Trump and his Republican Party. To be shorter and to the point, white-collar women in more affluent suburbs were more dominant over this primary than blue-collar men, in a former stronghold of unionized Democratic politics. The Lehigh Valley Democratic primary voters are changing, identity wise.

Is this trend going to help the Democrats or hurt them? This question has no obvious answer. For one thing, Democrats win both County Executive races last year with candidates who ran on their records of not raising taxes and providing core services to help those who need them, suggesting a more moderate message is what works in Lehigh Valley general elections. Secondly, we have to remember that there was a third candidate with a substantial share of the vote, largely tapping into younger voters, further left voters, and non-white voters, and it is not clearly obvious that all of these voters would have been engaged otherwise. Finally, while it’s clear that who voted in the primary election has dramatically changed, it’s not clear at all that general elections in the Lehigh Valley have changed in the same way.

My sense is that Susan Wild has a modest advantage going into the general election. Democrats did win both County Executive races in 2017, by increased (Lehigh) to record breaking (Northampton) margins. Hillary Clinton carried the district a little over 1% in 2016, and Democrats are seeing improved margins over her 2016 performance in most places. Still though, there are questions. If you look at where Wild lost, namely Northampton County and the Whitehall-Coplay area, those areas are also where Hillary lost in 2016. If Nothstein can hold Trump performance there, and mildly improve on his performance in Western Lehigh County (where he did finish first in his last County Commissioner race), he could easily overcome a 1% margin. Nothstein is probably a bit better fundraiser, at least so far, and Republicans are likely to heavily fund his quest to hold the seat. I think the race will be quite close, and quite nasty, but I think Democrats can win with Wild.