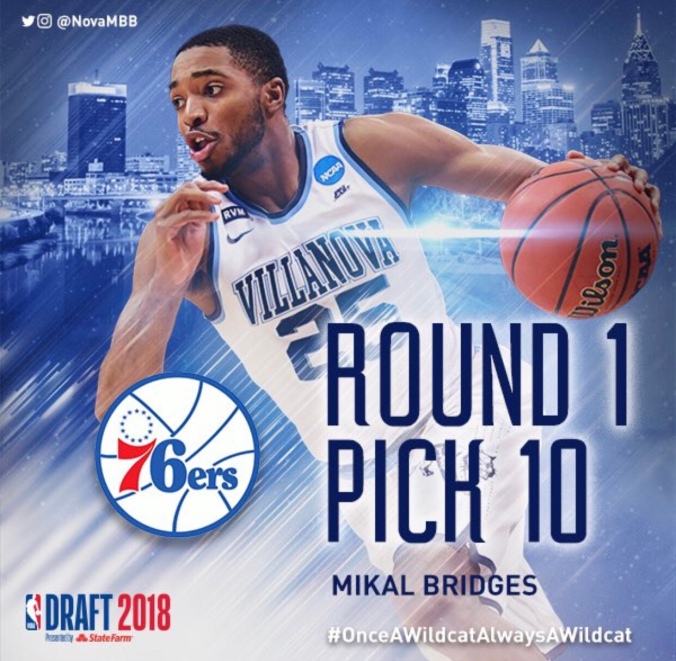 I decided to wait until after all the hot takes were done to write about the Sixers draft night- why compete with emotions and half baked responses? Here’s the honest truth- I really like Mikal Bridges and wanted him to be on the Sixers, but I love the trade for Zhaire Smith. I’m both disappointed and really happy my team did that. And I’m comfortable with both.

Let’s start from the beginning- it’s clear that Bridges and Smith were two of the top players on the Sixers board. The Sixers ended up with one of them, an unprotected first round pick, and a cheaper player against the cap. If you believe both Bridges and Smith are both going to be decent to good players, as I do, you can’t be mad with that haul out of number ten. If you believe neither will win an MVP, as I do, you can’t be too mad about either player being here or not. If you believe either may have been trade bait for a major star player, as I do, which one you keep is irrelevant.

I loved watching Bridges play at Villanova and appreciate his contributions to bringing two titles to the Philly area. I think he’s a little better than Zhaire Smith right now. He’s also older. I have no idea who ends up having a better career in the long run. Both are basically back-end lottery picks on paper, and could end up being All-Stars or busts. Smith has great length, and could be a plus defender and starter in the league. I’m absolutely fine with the Sixers keeping him. Frankly, both are fine by me.

The Sixers are not in the development stage anymore. They won a playoff series this season, and need to be looking for stars that can help them win a title. This trade helped them do that. They have plenty of cap space, and probably save a bit here. They drafted a player they can develop or use in a major trade. They acquired an asset in the deal too, which they will almost certainly trade for a star later. If they had turned down a trade that gave them this opportunity, all because they felt sentimental about Bridges’ local ties, I’d tell you to turn the television off. Basketball is an incredibly player friendly sport (compared to day football), and has a very progressive culture and CBA, but it is still a business. The Sixers job is to put the best product on the court that they can, and to try to win a championship. If sending Mikal Bridges to Phoenix achieves that, you have to do that. All signs say that will help them here. Don’t cry for Bridges- he’s still a Villanova legend, Phoenix is a cool city with a good young nucleus, and he’s getting paid as a number ten pick.

Sports are a business. You don’t want to end like the Phillies of five years ago- with a bunch of sentimental heroes from the 2008 championship run, who can’t play now. When you have a chance to improve your team, you do it. Winning teams sell tickets, sold tickets make money, and money helps players and owners in the NBA. It might have been cold, but the Sixers handled the Mikal Bridges pick perfectly- even if I hated watching it.