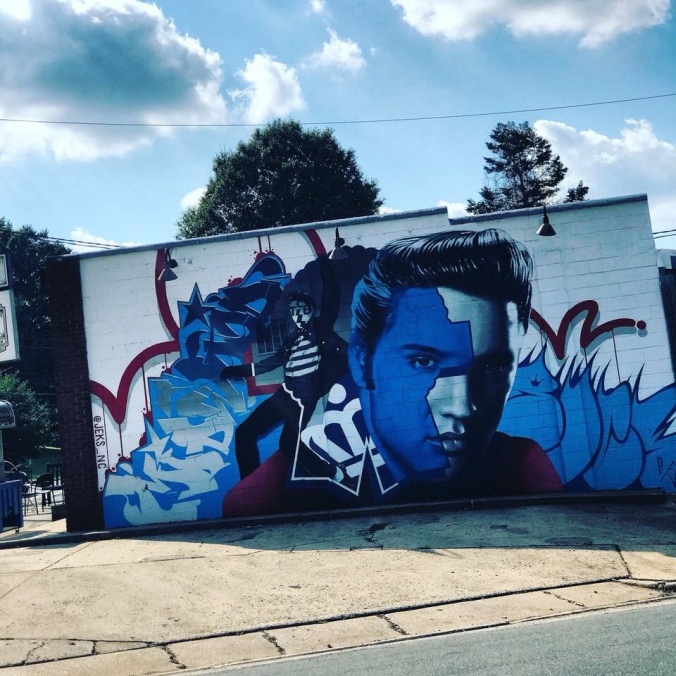 Good day, today is Saturday, October 13th, 2018, just 24 days before the 2018 midterm elections. The picture I put with this post is a mural along Central Avenue in Charlotte, NC, on the side of the Skylark Social Club. More about Elvis in a moment.

My day started bright and early. I really should stop doing this on 5.5 hours and a coffee. Or if I don’t want to sleep, I should have two tequilas instead of one.

But hey, at least I didn’t give up a home run to a relief pitcher last night, so my day is better than Clayton Kershaw’s.

About a week ago, I was Instagram-chatting with a really old friend of mine about our lives. Now I will tell you, she’s one of the cooler people I know. She went to Lehigh University, and that should tell you she’s smart, but she’s really conversationally smart too, beyond the books. She also might have partied her 20’s away harder than I did, and to more success. She’s a CPA, working and living in Manhattan since she graduated college.

I describe her in such detail, but purposely leaving her looks out of it for a moment. Why? Probably because they shouldn’t really matter in a discussion of her career. She’s smart and does her job. She has been recently job hunting, and she got a really good offer to leave. When she let her boss know (who she doesn’t describe as a very “enlightened” white guy), he counter-offered her a front office job, for less money, because “She’s too pretty to waste her life in accounting.” Say what? Her degree is in accounting. She’s been working in accounting for almost a decade. Why would you ever say this?

As I’ve grown up, I’ve come to realize the difference in what women face professionally, compared to me as a man. I try to shy away from whether or not I label myself as a “feminist” or not for many reasons that I’ll write about in another post (but they basically come down to my issues with being any -ism or -ist, as a person), but I think most men (yes, most) need to open their eyes towards the completely separate set of standards that women live under in the workplace. If you hire someone to do a job, their gender and looks should really not have any role in it. What does it matter if they are pretty or not, if they can do the job? This is just something a woman should never have to deal with.

I said above that she’s smart, and capable. She is. That should be more than enough to make clear in this post.

If you are into politics and are on Twitter, but don’t follow @Nate_Cohn, you’re missing out. He does much deeper dive, fundamental breakdowns of politics than many of the horse-race political reporters. His stuff is interesting.

He has been tweeting a lot about the New York Times live polls they have been releasing across the country. You can read the thread here. Here’s the striking thing to me- the solid leads Republicans have in red states, and the way they’ve opened up single-digit leads in areas that have been reliably red in the past, but seemed to be on the board. Real Trumpish Republican districts seem to have shifted slightly back there way since the Kavanaugh fight, while Trumpish states seem to have slid considerably backwards for Democrats. I never believed Beto would beat Ted Cruz, but I feel more sure now.

What we see here again is an example of how satisfying the Democratic base can make winning swing districts very difficult. The Democratic base doesn’t live in swing-districts the way the Republican base does. Look at the average margin of victory for the median Democratic member of Congress, as opposed to Republicans- some of that is gerrymandering, some of it is political sorting, or where voting blocks live. The Democratic base was passionate about stopping Kavanaugh, but they live in blue seats- so they’re not necessarily helpful here. I’m a bit surprised how this fight moved statewide races, particularly a small, but significant bump for Kemp in Georgia, and a significant one for Blackburn in Tennessee. Clearly though, the Democrats stand on Kavanaugh at least temporarily helped the GOP in places they hold now (which are where Democrats need to win to flip anything).

This isn’t to say I think the Democrats were wrong to fight on Kavanaugh, and the evidence isn’t yet unanimous (see the Indiana Senate race). I think there’s a time to stand on principle, and be willing to lose a fight- and Brett Kavanaugh on the U.S. Supreme Court for life is probably it. I’m just saying we might be feeling it bite back now.

The South is a complicated place, particularly when it comes to it’s history. One part I don’t find much to feel negative about is it’s musical history. As I said above, I would get back to Elvis, and here is where I do that.

The most unfortunate thing I have found in my time here is how far away Nashville actually is from Charlotte. If I got in the car right now, the 411 mile ride would take me over six hours. For me, that’s just not going to happen during election season.

That’s a shame, because I consider Nashville (along with Charlotte, Atlanta, and New Orleans) to be one of the four “must-see” spots of the South. I’m not a huge country fan, but I really do want to see the studios where Elvis and Johnny Cash made history. I’m a fan of both of them, and I find the industry and historic side of Nashville to be fascinating. While I’m not getting there right now, I need to. Elvis is the one part of Southern heritage I’d like to learn more about.

Today’s candidate of the day for you all is Fred Hubbell, the Democratic nominee for Governor of Iowa. Over the last several election cycles, Iowa has become a political hellscape, a place where the legislature has become hyper-partisan. The state government is pretty much entirely Republican now, and they’ve decided to run a privatized Medicaid expansion that has basically failed. If I wasn’t working on the things I’m working on, I almost ended up going to Iowa to work, because I’m so alarmed at what’s been done.