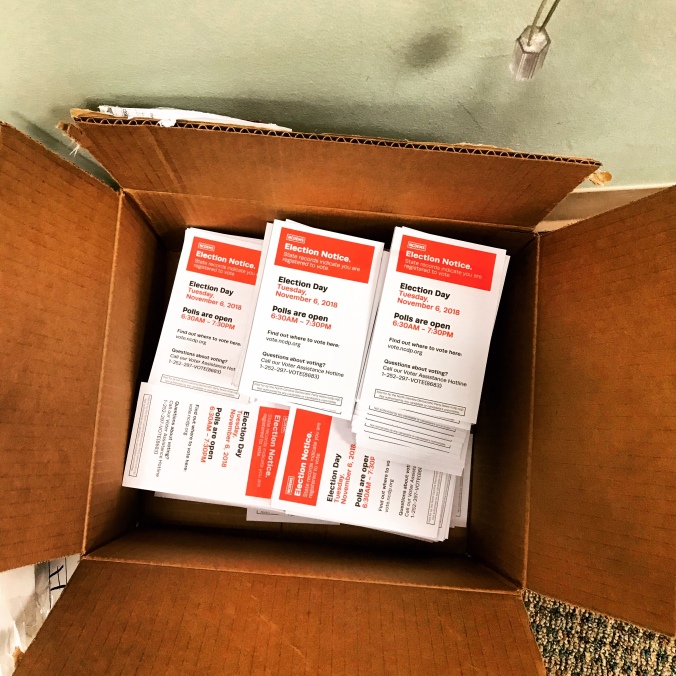 I saw her today at the reception, a glass of wine in her hand. I knew she was gonna meet her connection, at her feet was her footloose man.

The best part of GOTV? Everybody either is slacking off or trying to be the next James Carville. Nobody seems to just stay in their lanes, do their job, and follow directions.

Today’s candidate of the day is Rachel Hunt. Rachel is the daughter of a four-term former Governor of North Carolina, a fighter for quality public education, better jobs, and better health care. Rachel wants to make Raleigh work again, for the average people. Donate to help her here. Volunteer here.

Looking at the Governor’s Mansions, This May be where Democrats make their biggest gains on Tuesday. Despite probably not winning back Massachusetts, Vermont, New Hampshire, or Maryland, Democrats are poised for huge victories.

By my count, I favor Democrats in Maine, Ohio, Michigan, Illinois, Wisconsin, Iowa, Florida, New Mexico, and Nevada, for a pick up of 9 seats, giving them 25 Governor’s Mansions to 24, with 1 independent. I’m not conceding defeat for Democrats in Georgia, Kansas, South Dakota, and New Hampshire too. It’s going to be a good night for Democrats at the state level.

Is anyone cooler than Joel Embiid? He had another monster game, with 39 points, 17 boards, and 2 blocks in a win over Detroit. He did so against Andre Drummond, who is actually pretty good. Then he went on social media and dogged Drummond everywhere he could.

The Sixers don’t look like a championship team yet to me, but Embiid looks like he improved- yet again. That’s crazy.

No feeling bad for Patrick Corbin. The Diamondbacks lefty is about to get paid. With Clayton Kershaw and Cole Hamels getting 3/$93 million and the option year at $20 million respectively, Corbin would seem to be heading towards $25 million a year and five or six years.

Today was Baconfest up in Easton. I’m not there. It’s safe to say I’m jealous.