I’d like to think I’m a thankful person, but the truth is that I take a lot of things in my life for granted. I’ve been blessed with many great things in life, whether it be my family, a comfortable middle-class life, intellectual and athletic abilities, decent health, a solid education, friends, second (and third) chances, or even just the chance to be alive. When you live every day in relative peace and tranquility, it becomes your norm, and you take it for granted. It’s not to say I haven’t had trials and tribulations, it’s to say I’ve lived my life free of oppression and despair. I should be thankful for that, every day.

This Christmas though, I am happy for my career in politics. Since I was 19, I’ve lived around political campaigns, and the people in them. Many, many of those people are not like me. I’m not calling them better or worse, but they’re there for very different reasons and motivations, and their different perspectives have enriched my understanding of life. Learning from their experiences, I think I’ve grown to be a better man than I might have grown up to be, as I was as a 19 year old intern on my first campaign.

Politics hasn’t made me rich, God knows that, but I’d like to think it’s enriched me as a person ten fold. I’d like to think the people I’ve met professionally, in addition to the people in my personal and private life, have all left an impression on me in some way. I’d like to believe the pathway I’ve chosen in life has made me better than perhaps I would have been otherwise. Lord knows I’m not a perfect person, that my vices and flaws would leave me unacceptable to some. Nevertheless, I’d like to think those of you who have gifted me with your presence have made me a better person than I would have been, and that this better person has helped make the world a better place than it would have been otherwise. We’ll all die, and we’ll all make mistakes on the way there, I’m not really worried about that. I’m just thankful that my pathway has forced me to take stock of different positions in life than my own, and maybe changed my view of the world for the better.

I think my time out in the field will come to an end soon. Probably after 2020. I’m on the old end of the pool at this point, so I need to be in an office or headquarters, and maybe have a little life stability. At 35, that’s not too much to ask.

Thank you to you all. Merry Christmas. 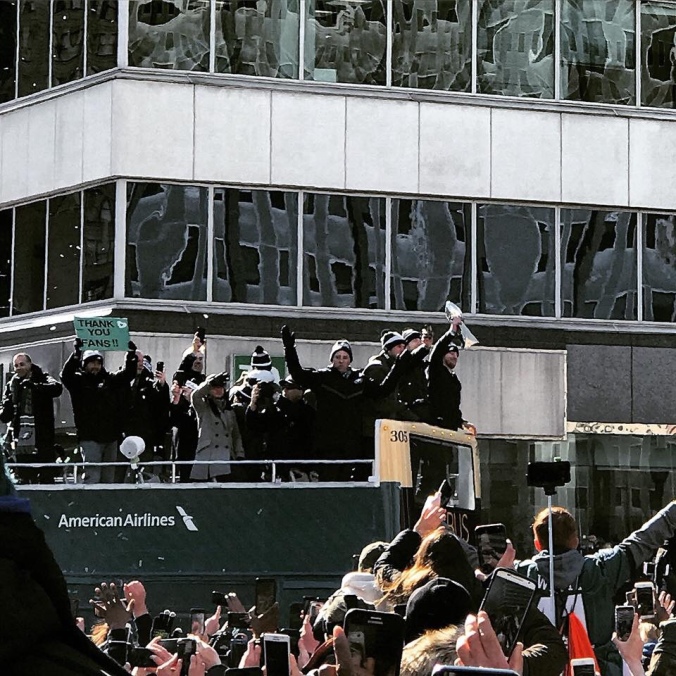 On their way to last year’s Super Bowl Championship, the Eagles were home underdogs against the Falcons and the Vikings, then were record-breaking underdogs in the Super Bowl against New England. Why? Nick Foles was playing quarterback instead of Carson Wentz. The Eagles won all of those games of course, and Foles won the Super Bowl MVP, beating Tom Brady.

I’m not sure why everyone is shocked that Foles lead the Eagles to a victory at the Rams? What have the Rams won that Foles-lead teams haven’t? I mean, really, if he beats Houston on Sunday at home, is it anymore shocking than if he loses? At this point, doesn’t the guy have to be close to a jump ball in big games? He seems to run the Eagles offense smoother. He steps up in big spots. He plays fearless. I’m not advocating that he’s a Hall-of-Famer anymore than I would for Cole Hamels in baseball, but they were probably the two coolest customers in big spots that Philadelphia has produced in my lifetime.

When Foles was quarterback with Chip Kelly as coach, I was convinced he would fail. I think if that had remained the norm in Philadelphia, he would have. I think a lot of people haven’t accepted that Foles, in this conditions and this moment, is simply different. It took me a minute to believe. After Super Bowl 52 I won’t doubt again.

On Friday night I attended Senator Chris Dodd’s annual holiday gathering, as I have most years in the decade-plus since his 2008 campaign gave me my first “major” political gig. I go in part to see people (though less and less of my former co-workers attend), and in part out of respect- one of the most accomplished Senators of the last century actually employed me and invites me to join in the company of that room. It’s an honor, and one of only four reasons I put on a tie (funerals, weddings, and Presidential visits being the others).

There is a common theme in Presidential candidates I tend to like and support, one that Chris Dodd personified- experience, achievement, gravitas, accomplishments. This was true of Hillary Clinton, Wesley Clark, John Kerry, and obviously for Dodd. Chris Dodd authored or lead passage on the Family and Medical Leave Act, Dodd-Frank, the 2008 Mental Health Parity Act, Part of the Affordable Care Act, the Terrorism Risk Insurance Act, the India/U.S. Nuclear Accords, TARP, the Private Securities Litigation Reform Act, the Class Action Fairness Reform Act of 2005, the Help America Vote Act, the Child Care Act, and numerous other pieces of legislation I can’t remember or name, but impacted millions of lives for the better. His career was one of achievement, he got things done, even when it wasn’t front page news. That’s what I tend to seek out in political leaders I support.

I am not looking for the 2020 Democratic nominee to inspire me. I’m not looking for a generational shift. I don’t care much for their rhetoric. Surely any Democratic nominee will come to the debate with a universal health plan, a climate change/energy policy, ideas to lower the cost of higher education, and a host of other liberal policy plans that we desperately need, even if they are just copied from their colleagues. I don’t give a damn about that, so long as they’re in the realm of reality. I care about how they’re going to get the plans passed and enacted into law. Show me your revenue streams to fund your ideas, tell me your Congressional allies you will work with. In a post-Trump world, cleaning up for a disaster administration, I need to see that you actually know what you’re doing. This is not a time for on-the-job training, just because I want to feel good and inspired by my choice. I’ll take an imperfect vessel if it can actually get us through the rocky waves of the world Trump is leaving us.

I recently attended George H.W. Bush’s lying in state at the Capitol, and they gave us a card on the way out that essentially had his government resume on the back. During the Cold War we tended to nominate and elect very experienced people for President, something that has become less common since then. Perhaps Americans would be much happier with their country if they’d seek that out again. The challenges we face today are every bit as complex and dangerous as they were then. Whether it’s Putin, Climate Change, automation, terrorism, globalization, nuclear proliferation, cyber warfare, or any of the other major global issues, we need someone ready for the job on day one. I don’t care how old they are, or exactly what’s on their resume. I do care that they have demonstrated the intellect, the grit, and execution to get things done. I do want to see that they have plans, not just words about what our road ahead shall be.