Hit pieces on Neera Tanden. Declarations of “victory” over Fox News. Accusations that Democrats are “agonizing” over how to beat Bernie. Even reporters threatening twitter users with “doxxing” for criticizing their work on Bernie:

Yes, this is real life. It’s not even one incident.

I keep asking myself the same question- why the f**k does the press keep covering for this guy? Like, I come to all the normal “white bread” answers that leave me unsatisfied- they’re hyper educated big city kids that think socialism is cool, they despise the overly secretive “Clinton Washington” crowd, they think the system is broken, etc. I just find that answer quite unsatisfying. This guy gets a pass for his lack of achievements in Congress, his lack of realistic details in his plans, his creepy essays, his lack of a job until he was 40, his hiring a Putin stooge, his bad votes on immigration, guns, and the crime bill, and everything else, from so many reporters. The answers for why this happens fall flat for me. Even things like the investigation into his wife bankrupting a for-profit college, Bernie’s hypocrisy on millionaires, and Bernie failing to vote for Russian sanctions get less ink than Hillary’s e-mails, and always come with caveats. It’s like they’re a part of his press shop. It couldn’t be that Bernie is nothing but an angry, old grifter. Never.

Their advocacy has changed in the past few days, as I noted above. It’s not just advocacy for ole’ Bernard- it’s offensive aggression on his behalf, particularly coming out of the New York Times. It’s an actual effort to enforce a view of the race that isn’t true- the myth that Bernie Sanders has momentum and is the front-runner to be the Democratic nominee. To be clear, he has a chance to win the nomination, provided the field stays divided. He raised the most money in the first quarter, just as he out-raised Hillary Clinton in 2016- but his $18 million haul is not overwhelming and crushing when compared with Kamala Harris $12 million, Beto O’Rourke’s $9 million plus, Pete Buttigieg’s $7 million, or even the $6 million of Elizabeth Warren and $5.2 million of Amy Klobuchar. All of these candidates are less known, and in their first national run. As the field begins to narrow in the coming months, all can improve. On top of this, Bernie trails former Vice-President Joe Biden in nearly every poll, and has seen roughly half of his 2016 support evaporate in the last three years. He’s a front-runner, he might win if he never has to get 50%, but Bernie Sanders has no particular momentum, or recent strength that should back up his supposed “momentum.” All of this reporting is a myth.

So- why? Honestly, I have no idea. I’d love to know why @NYTLiz, @kenvogel, and @katierogers are all racing to aid Bernie right now. Of course they’ll call it a ridiculous accusation. Who would ever question their intentions? 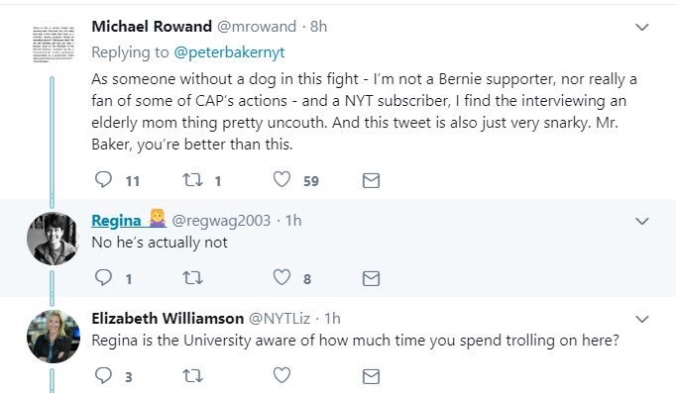