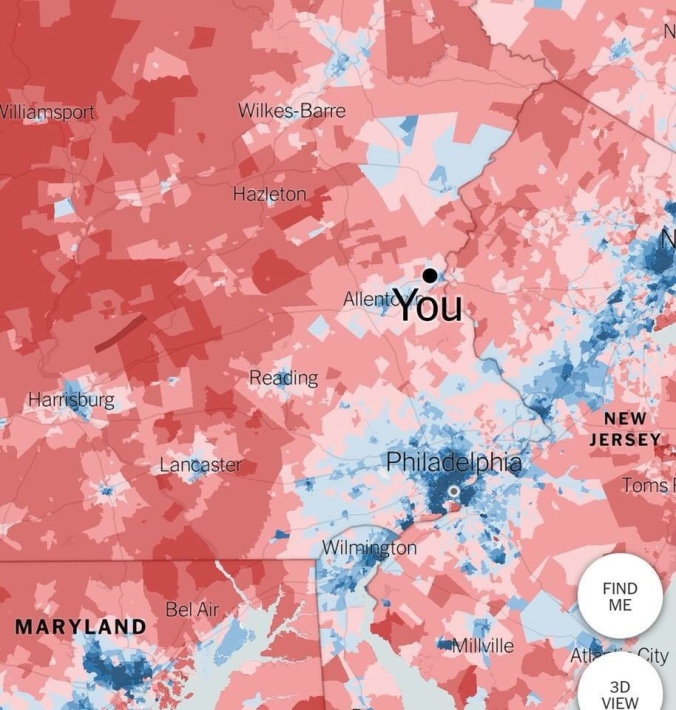 To hear my boss in North Carolina tell it, he actually thought we were going to win the Tar Heel state for Hillary Clinton deep into the night of November 8th, 2016. The numbers from Mecklenburg, Wake, Durham, and Orange Counties, the backbone of Democratic power in the state, were hitting voter turnout and performance targets. Turnout was high statewide, presumably a good thing for Democrats. But it wasn’t enough. Democrats lost the battleground state by slightly less than 175,000 votes in the end.

In my native Pennsylvania, the story was similar. Hillary Clinton’s margin out of Philadelphia was greater than either of Bill Clinton’s, Al Gore’s, John Kerry’s or anyone else who won the state not named Barack Obama. She carried all four of Philadelphia’s “collar counties,” the former backbone of Republicans in the state, and in some cases carried them substantially. She carried Allegheny County (Pittsburgh area) by a margin exceeding President Obama’s. She carried places like Dauphin County (the state capitol) and Centre County (Penn State), something unthinkable when Gore and Kerry were carrying the state. Turnout was very high across the state. Like North Carolina, Hillary spared no efforts to win the state, visiting constantly.

The list of examples showing the same thing is fairly substantial. Hillary campaigned hard in Florida, and exceeded the early vote numbers that she was expected to need in almost every metropolitan area. She lost the state very close. Turnout was high, her margins in the cities were impressive, and yet every swing state seemed to break the same way. Yet the myth persists- Hillary’s campaign didn’t do enough to motivate the base Democrats and they didn’t do enough to spike turnout among “marginal” voters. Some Democrats insist that we must do this better to win in 2020. The facts would argue that we did this pretty well in 2016, AND that there may be only limited ability to do this better in 2020. Just about every candidate running would be lucky to match her performance among the base in 2020. I know, it’s a sobering thought, but the facts say this conventional talking point is wrong.

There’s also an equally false myth out there about Donald Trump- that he motivated tens of millions of new white “hillbilly” voters to turn out. Let me let you in on a little secret, he didn’t. Trump got a little less than two million more votes than Mitt Romney, which with the increased voter turnout, made for a 1% drop in the Republican share of the vote. Trump got the same percentage of the vote as McCain did in a blowout loss in 2008, which means he basically got the population growth difference. This may shock you, but basically if Clinton has received 49% instead of 48%, she probably would have won six more states, and an electoral blowout (provided they weren’t all in the big coastal blue states). Donald Trump actually had no special turnout machine, his margin was not a bunch of new white Republicans. His victory was actually fueled by key crossover Democrats in the swing states, and people disgusted with both that picked third party candidates.

The bitter truth is that Democrats lost the 2016 not because they didn’t do enough to motivate the base voters in Philadelphia, Cleveland or Charlotte, but because of voters they lost in Eastern North Carolina, Northeast Pennsylvania, Eastern Iowa, and suburban Milwaukee. Our ability to win them back isn’t the only factor that matters in 2020, but it is a very big one.