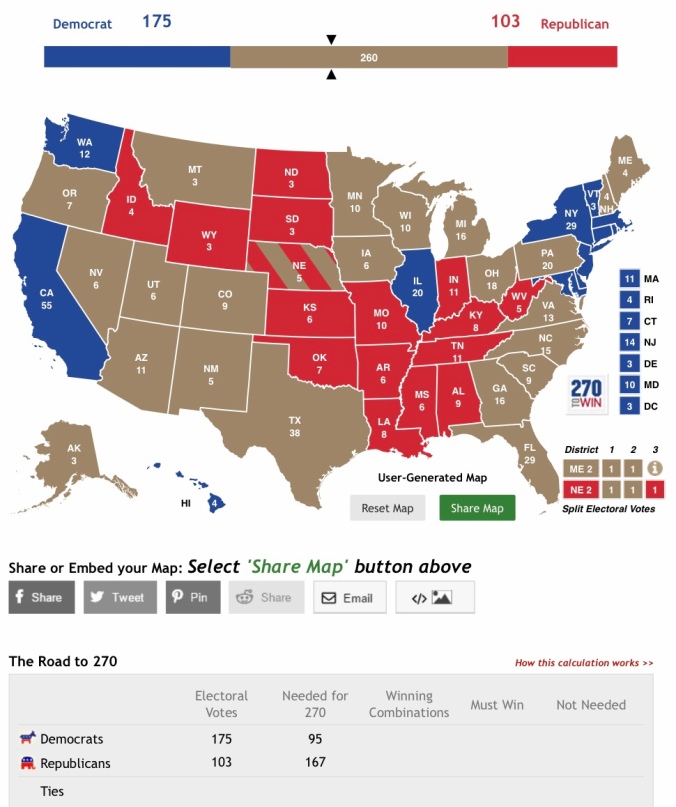 Everybody has an opinion, and it usually matches their politics. Will Donald Trump be re-elected? No way, say the resisters. Of course, say the “red hats.” Not if Bernie is nominated, say the Socialists. And the moderate Democrats and #NeverTrump Republicans keep cautioning Democrats to stop moving left. But what do the numbers say?

Above is what I call the consensus concession map. The states in blue and red are the states that almost no one is arguing will change. The Democratic nominee starts at 175. Trump starts at 103. Under virtually any scenario where either side loses states they have above, the election was simply a national consensus landslide against both the losing party and nominee.

How likely is that to happen? It’s not going to happen. The Democrats almost can’t get beaten any worse than this, as Donald Trump is an unpopular incumbent President. I see no scenario where Trump falls below this either- his approval is higher today than it was on Election Day of 2016, when it was just 38%. He got 46% of the vote that day. With over 90% approval among Republicans, Trump basically can’t lose these dark red states. His current approval on Real Clear Politics is 43.2%. 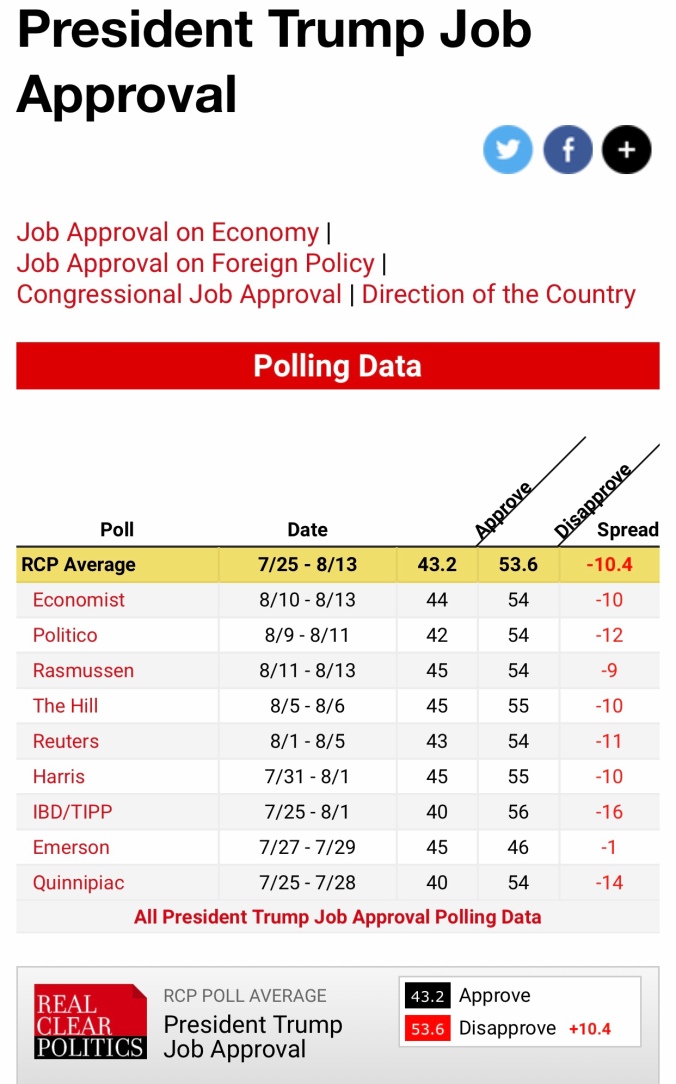 So where do we begin? Let’s start here, a fair approximation of what is truly possible as a battleground. All of the Obama-Trump states in play, all of the states Trump was close in are in play, and the Democrats hopes in some Southern and Southwestern states remain in play. From here, we begin at 188-125.

Here’s some cold water on everyone though- not all of those states are in play. If either party ended up winning all of these states, it’s a historic blowout. Just for fun, here’s what those maps would look like. 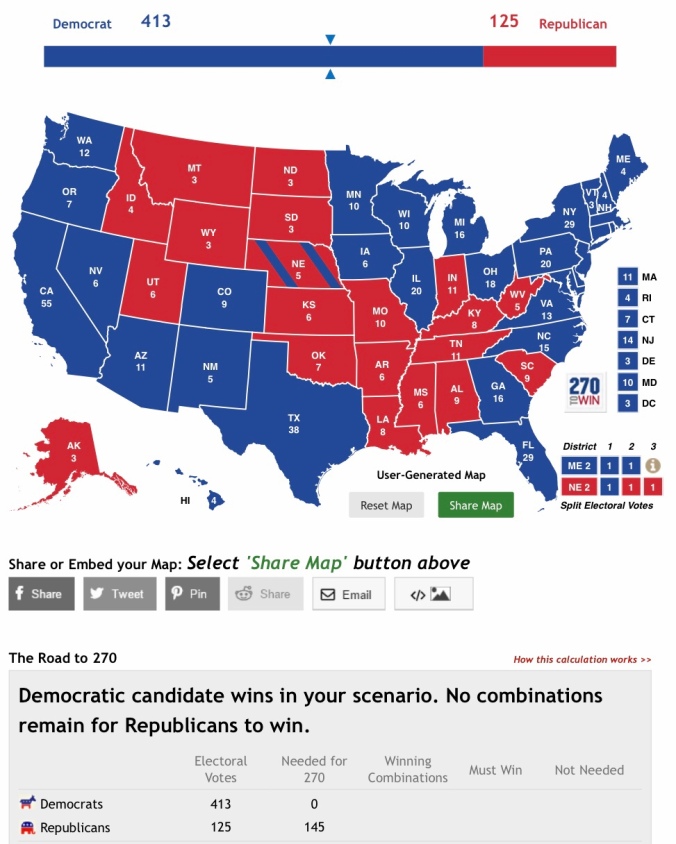 Now that we’ve gotten that out of our systems, understand that those scenarios are really unlikely unless one side or the other dramatically changes it’s mind about itself. Since that won’t happen, here’s my realist battleground map:

Behold a map where the Democratic nominee starts out with every Hillary state but Nevada, while Trump is defending the “Obama” states he picked up, plus Arizona and North Carolina. In other words, it’s 2016 and 2012’s battlegrounds, plus Arizona. What do we know about this? The Democrats only need to be a little better than they were in 2016, but these things usually run in one-sided trends at the end. Trump had to win all the swing voters in 2016 to squeak out a win, but he did. Barack Obama won nearly every swing state in 2008 and 2012 as well.

This is the “momentum” Democratic map, where the swing voters all break Democrats way at the end, and Democratic turnout is high. 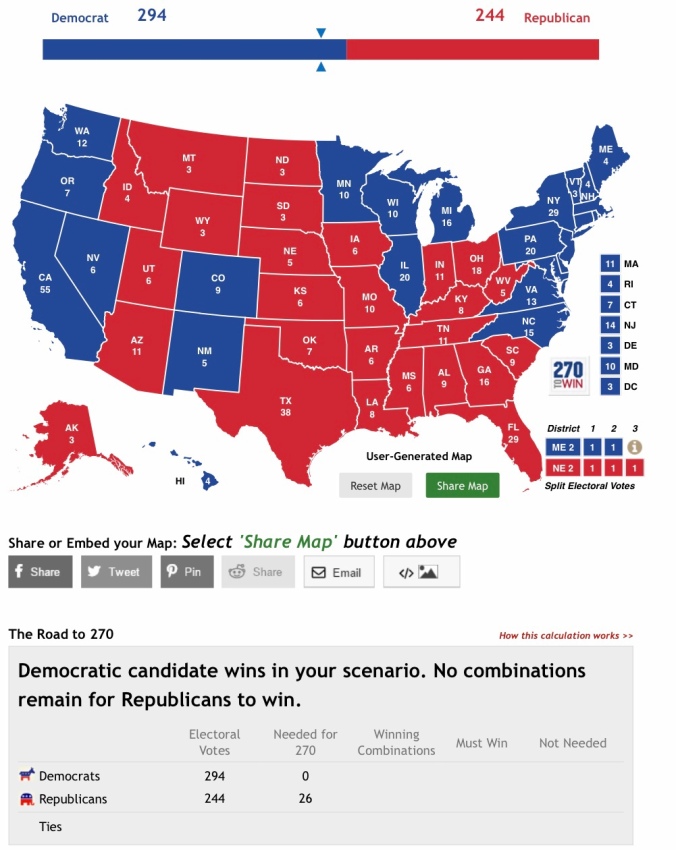 This is the scenario where Democrats squeak out a win by flipping the PA/MI/WI states from last time, plus North Carolina, where they had a good midterm, but states like Iowa and Ohio just don’t budge, Trump hangs on in Arizona, and Florida continues trending badly. This map is essentially one where both messages work at reaching their sides, but Democrats win.

Here’s a possible narrow victory through the Rust Belt. 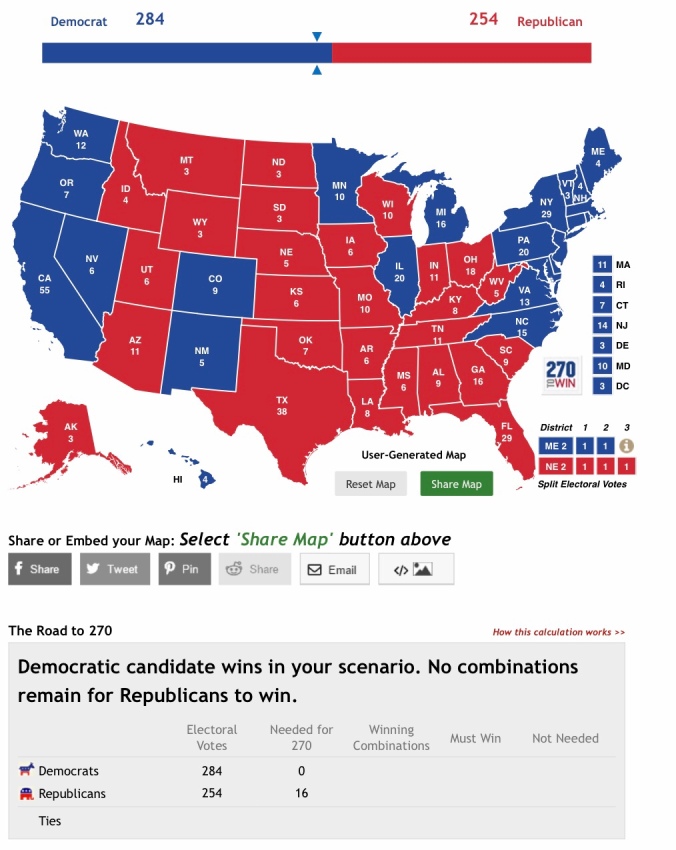 Here’s a scenario through North Carolina.

Ok, so enough with the fun stuff- how does Donald Trump win? You said it couldn’t happen last time, but it did. So let’s start with scenario A, 2016. He gets back to 46% and wins.

Not much imagination in that. So let’s go with a scenario B- where Trump builds off of 2016. He surges in some of the predominantly white states he lost last time, and gets this:

Minnesota, Maine, and New Hampshire flip, and Trump wins on the back of over 60% of the white vote.

One more scenario here, which is just a straight Trump sweep of what he won last time, the three states above, and the more diverse, but highly competitive Nevada, Colorado, and Virginia.

Could there be chaos? Yes. Ties are possible. Very possible. I came up with two plausible pathways there. 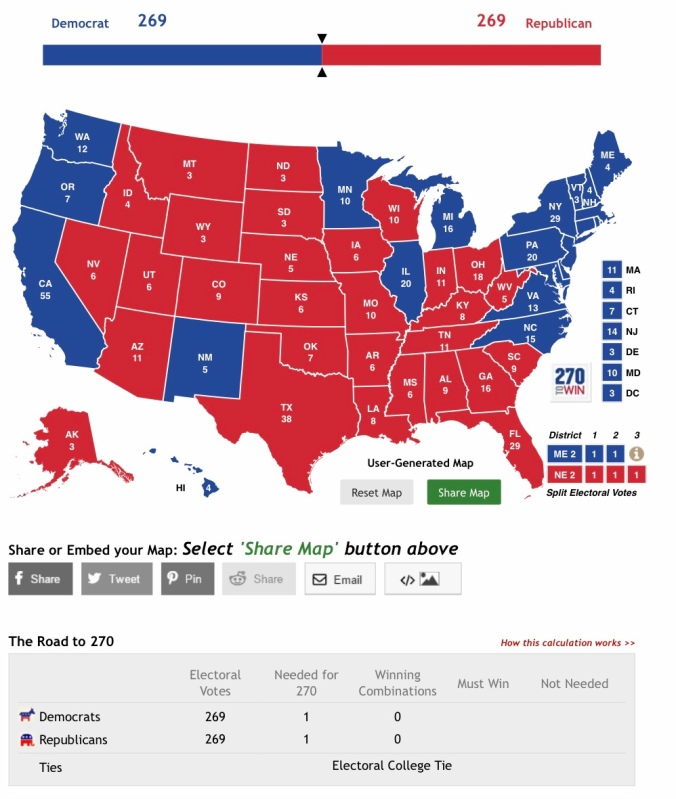 Who knows who controls Congress under this scenario, but things get chaotic. I doubt either side accepts the results. Things are bad.

How do Democrats most insure defeat in 2020- embrace a “base only” strategy and completely eschew persuading anyone that’s not neatly in their demographic camp. While the “emerging” electoral coalition that includes minorities and millennials largely is out there, the reality is that it is not ready to insure electoral college victories. This is where a “screw the Rust Belt strategy” begins 2020:

It’s not as dreamy as some people make it sound on the internet or on TV. Not at all.

So where do I have 2020 right now? Here’s my current prediction map: 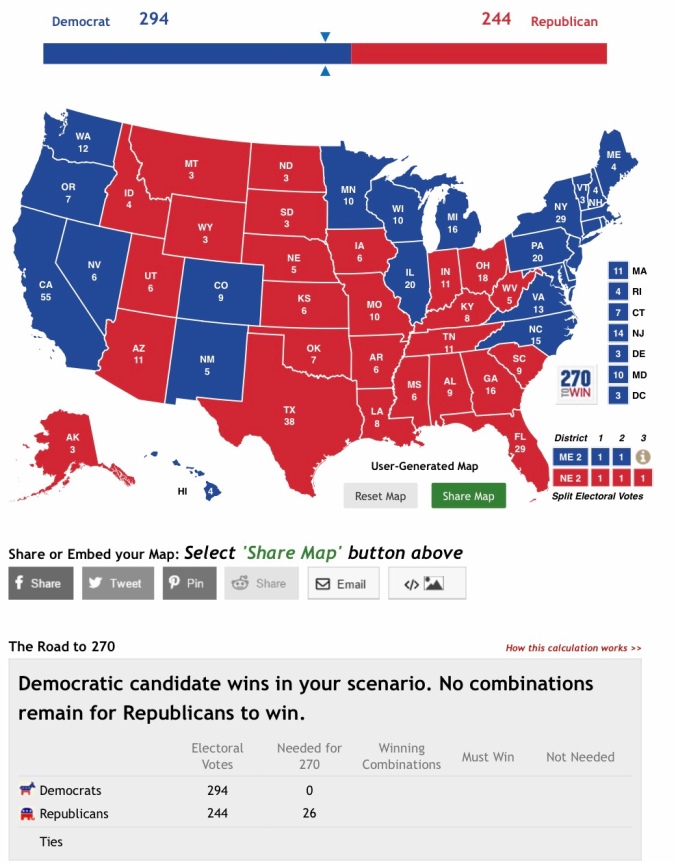 I do not take into account the nominee or VP- yet. I might give Joe Biden more Rust Belt states, or Kamala Harris a shot at Georgia, or a ticket with Castro on it Arizona or Texas, but for now I can’t. I just give these states based on generic opinions. I might give Trump more states against a Bernie Sanders or other more lefty candidates too. But, without the benefit of particulars, I’m here right now.